Last night’s contest between the Georgia Bulldogs (8-3) and the Georgia Tech Yellow Jackets (6-4) left the rims inside McCamish Pavillion bruised and battered.  The fans that came to watch offense on Tuesday evening definitely left the arena sorely disappointed.  Neither team shot above 38% from the floor, and Tech hit only 1 for 10 from beyond the arc, compared to UGA’s 3 for 18 effort.  Georgia Tech managed just 43 points, its lowest output since being held to 41 by Clemson back in 2014. 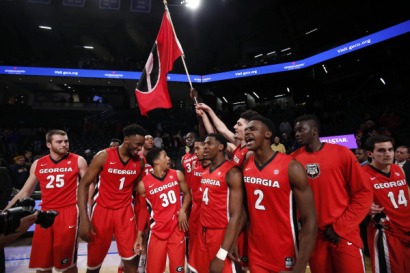 The Jackets ran an extended 1-3-1 zone for much of the night in an effort to limit Yante Maten’s looks inside, and to their credit, it worked.  Maten had very few opportunities where he received the ball on the block close to the bucket, and even when he did, he was immediately surrounded by multiple Tech defenders.  Maten finished the night as the game’s leading scorer with 16 points, but they were hard-earned and came at the expense of a  5 for 12 shooting effort.

J.J. Frazier scored 15 points, but it certainly wasn’t one of his better games as a Bulldog.  He once again struggled with his shot, making only 1 of his 6 attempts from the perimeter.  Frazier also dished out 4 turnovers to just 2 assists.  However, he was the only UGA point guard that seemed capable of attacking Tech’s zone and drawing multiple defenders so that his teammates could get open.  Turtle Jackson, who thankfully only played 12 minutes, did the opposite as he got rid of the ball as soon as he could once it crossed half court.  Not that UGA’s offense was clicking on all cylinders last night by any means, but it went into downright stall out mode when Turtle took the helm so that J.J. could rest.

Something tells me more teams might start defending Georgia in this manner moving forward.

Coach Mark Fox employed a man defense for most of the game, which made sense considering UGA had the more talented roster.  I cannot say that I have seen a lot of Tech basketball this year, but offensively, there is not a lot there.  The Jackets’ leading scorer, Ben Lammers, was the only Tech player to end up in double-figures as he scored 10 points on a 4 for 10 night from the floor.  Lammers also had 8 rebounds and 3 blocks, which earned him “Player of the Game” honors according to the giant replay screen above center court.  Considering his team got trounced and he had just the 4th highest point total of the night, I hope that Lammers doesn’t take much solace in that meaningless award.

Tech’s other senior big, Quinton Stephens, was determined to show the world that he can in fact create his own shot off the dribble.  However, the basketball gods inside McCamish had other ideas as Stephens missed all 9 of his attempts from the floor and turned the ball over 4 times.

UGA out rebounded the Jackets by a tally of 40-31, and even more importantly, they limited Tech to only 2 second chance points.  Considering how poorly the Jackets shot it on Tuesday, Georgia’s defensive rebounding might have been the difference in this game as they permitted Tech to grab just 5 offensive boards.

Critical moment of the game #1

The first came with 7:45 remaining before the break and the Dawgs leading 19-10, following an old-fashioned three-point play by Yante Maten.  Georgia had wrestled control of this contest from the Jackets, and they appeared poised to deliver a knockout blow to the home team going into the half.  However, instead of keeping his foot on the pedal, Mark Fox opted to pump the breaks, taking Maten out 17 seconds later and then removing Frazier a minute after that.  The result: Tech went on a 6-0 run and after a pair of free throws by Josh Okogie the Jackets only trailed the Dawgs 19-16.  Georgia ended up taking a 27-18 advantage into the intermission, but it felt like they should have been up by 15 or more.

Critical moment of the game #2

With 15:22 left and UGA up 34-24, Georgia Tech decided to extend a media timeout for a planned on-court celebration of its Governor’s Cup trophy that the football team earned in Athens back in November.  I have no idea why this celebration didn’t occur at some point during halftime since the game operations people obviously knew that the football players were going to take the floor.  Apparently this commemoration did not sit well with Coach Fox’s team as they outscored Tech 13-8 over the next 8 minutes, extending the Georgia lead to 47-32, and putting this contest out of reach for Josh Pastner’s bunch.

While this game was not a thing of beauty, all and all, it was a huge win for the Dawgs.  Georgia secured the non-conference win over a Power 5 opponent that it desperately needed, and this victory came on the road, which was an added bonus.  Another thing Coach Fox’s team did was avoid a potential “bad loss” to a Tech team that currently has an RPI of 169 and no prospects of moving that number below the century mark any time soon.