Anyone following Georgia basketball this season has surely been privy to the comments surrounding UGA’s need to find an established third scoring option.  Many had hoped that that would be Juwan Parker, who is currently netting 8 points per contest.  As the season progresses into conference play, Parker may boost his offensive output and blast into the realm of double-digit scoring, but for this Dawgs team that increase may come at a cost.  Currently, Parker is shooting 33% from the floor and 11% from beyond the arc, numbers that aren’t that far off from his career averages heading into this season (33% from the floor and 20% from 3-point land).  For Parker to start scoring even more, Georgia will have to endure a lot more missing as well.

Others thought that the two 4-star recruits, Jordan Harris and Tyree Crump, might help to shore up the scoring load that would be abandoned by the departures of Kenny Gaines and Charles Mann.  Harris, who has worked his way into the starting lineup, is getting 5.2 points per game, but he’s still looking awful freshman-like whenever he puts the ball on the floor.  Defenders have been able to strip the ball from his hands far too easily when he drives the ball, and that problem will only get worse once conference play begins.  And Crump is barely seeing the floor.

It is safe to say at this point that Mark Fox may not get another reliable scoring option this season, and that’s a problem.  Yante Maten averaged over 24 points against the likes of Clemson, Kansas  and Marquette, and UGA still lost all three games.  Against Oakland, Maten was rendered ineffective due to foul trouble, managing only 6 points; Georgia lost again.  Whether Maten scores 30 or 6, the Bulldogs are still very beatable.

In Mark Fox’s seven years at UGA, his most successful seasons have come when his team’s scoring has been balanced.  However, in order for a team to have balanced scoring, it first has to have more than two players that can score the ball effectively.  Let’s examine Fox’s lineups throughout his tenure at Georgia in order of what I consider to be most successful to least successful, beginning with his two NCAA tournament participants: 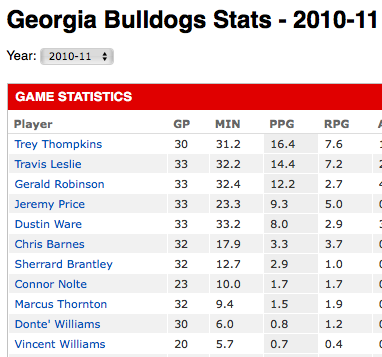 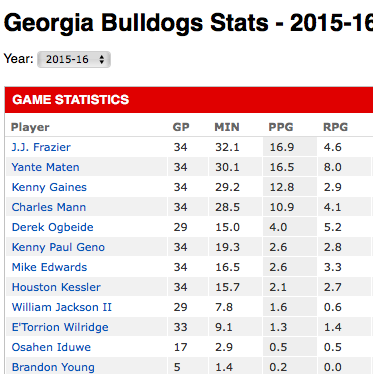 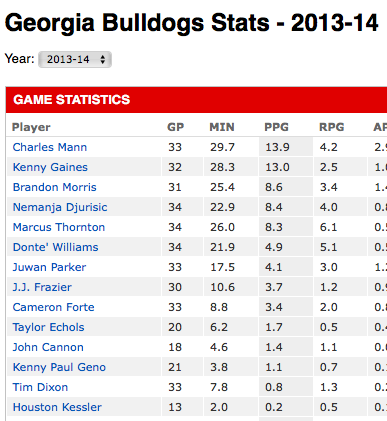 The remaining Fox-lead teams all had losing records: 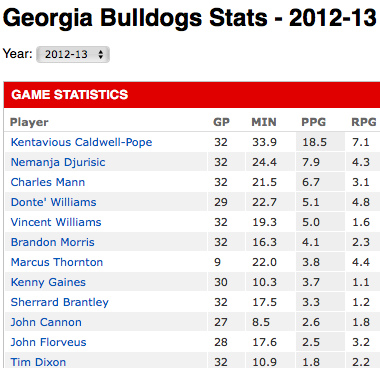 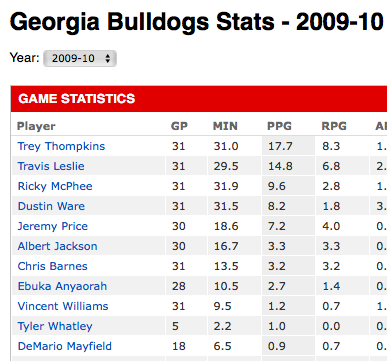 And finally, a look at this year’s current scoring numbers: 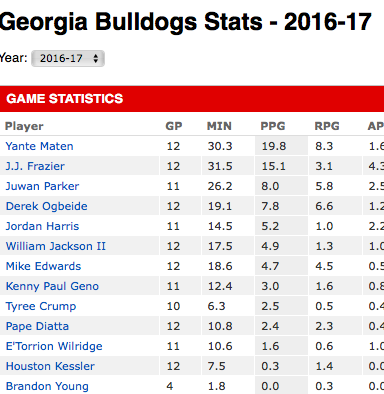 Noticing a trend?  When Fox has had only two players at most scoring in double-digits, his teams have not only failed to reach the Big Dance, but they’ve only recorded winning records once in those four seasons.  At the moment, it’s definitely looking like a two-player in double-digit kind of season for Fox, and he’s got no one to blame for that other than himself.  The Dawgs have the best guard-forward combo in Frazier and Maten that they’ve had since the 2010-2011 team that featured Gerald Robinson, Jr. and Trey Thompkins.  Unfortunately, the Frazier-Maten Express has been relatively easy for opponents to manage due to their inadequate supporting cast.

If opponents chose to double-team Trey Thompkins, he had excellent outlets to choose from in Travis Leslie, Gerald Robinson, Jr. and Jeremy Price.  Marcus Thornton could rely on Kenny Gaines, Charles Mann and Neme Djurisic if he felt overly pressured.

Who can Frazier or Maten kick the ball too when defenses collapse on them?  Or even worse, when one of them is not on the floor?