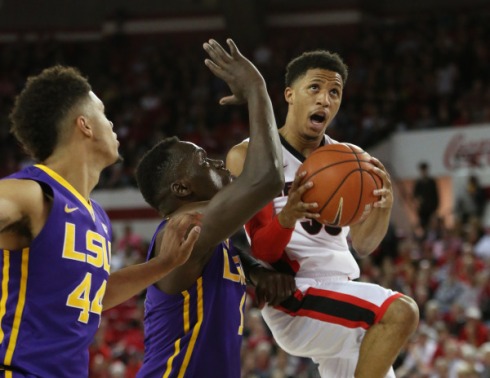 The narrative for Georgia’s (17-12; 8-8) basketball team has become incredibly predictable these days.  Basically, it goes something like this: with its best interior player watching from the sidelines, one undersized point guard continues to refuse to let this team lose.

Despite at one point holding a 17-point advantage in the first half, UGA found itself with the ball and trailing LSU 80-79 with only 6.9 seconds left.  The Dawgs got the ball to J.J. Frazier, who quickly split a double team before sprinting down the court and drawing a foul with less than 2 seconds left.  Frazier buried the two free throws, which gave UGA an 81-80 edge.  LSU attempted a full court pass, but it landed in Derek Ogbeide’s hands.  Ogbeide began walking with the ball as if the game were over, and fortunately for Georgia, the referees missed an obvious traveling violation and found a foul in the video replay that sent Ogbeide to the line with only 1.3 left.  Georgia would win 82-80, and more importantly, the Dawgs avoided what could have been a shameful home loss to a Tiger team that rolled into Athens with a 1-14 SEC record.

As refreshing as it was to see Frazier pull out another win for this team, the fact that Georgia relinquished its huge lead and almost lost to the worst team in the conference, even without Maten, is concerning.  After shooting 55% from the floor and building up a 44-37 halftime lead, the Dawgs began to unravel midway through the second half.  Georgia bolstered its advantage to 55-42 following an E’Torrian Wilridge three-pointer with 16:54 remaining.  But then UGA got careless with the ball, turning it over 7 times after the break.  The Dawgs also failed to defend the glass and allowed LSU to haul down 7 of its 11 offensive boards in the second half; the Tigers scored 14 second chance points to Georgia’s 6.  UGA came dangerously close to becoming the team that would snap LSU’s 14-game SEC losing streak.

Georgia escaped today, but it was so much closer than it should have been.  I fear that the offense is almost becoming too Frazier-centric down the stretch.  While obviously a team wants the ball in the hands of its best player when it counts, for the final 4 minutes of the LSU game the Dawgs merely stalled for 20 seconds before getting the ball to J.J. so that he could try to create something.  Frazier missed his final 5 field goal attempts, largely because the Tigers were dedicating nearly all their defensive resources to stopping him.  I’m not so sure this offensive strategy will work against a stronger opponent like Auburn, and I’m positive its not going to be enough against Arkansas.

But the thing is, even though Jordan Harris is also apparently injured, Mark Fox has other offensive weapons at his disposal, yet he continues to be reluctant to use them.  For the second straight game, freshman Tyree Crump came off the bench and buried a pair of three-pointers, only to spend the majority of the game on the bench.  Tonight, Crump played 8 minutes and scored 6 points and dished out 2 assists; Turtle Jackson played 32 minutes, scoring 9 points and handing out 2 turnovers.  Fox’s unwillingness to play Crump, even though he continues to provide perimeter offense, will certainly go down as one of the mysteries of this team’s season.

In addition to Frazier’s 29 points and 8 assists, both Ogbeide and Juwan Parker finished in double-digits as they scored 12 apiece.  LSU, who was led by Antonio Blakeny’s 20 points, also had 3 players end up in double-figures, with Brandon Sampson and Skylar Mays netting 15 each.

17 thoughts on “UGA does enough to hang on against LSU”