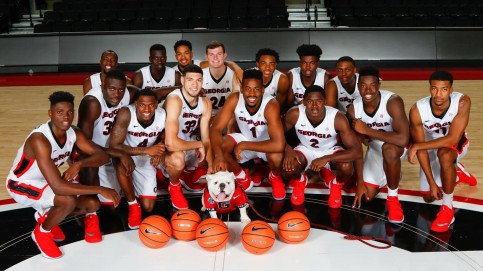 In the spirit of exhibition games, this post will not delve too much into the play-by-play or statistics from UGA’s scrimmage tonight with the Valdosta State Blazers.  I mean, how much can be gleaned from a game against a Division II opponent? Not to mention that Mark Fox, as he tends to often do, subbed players in and out at a torrid rate.  However, that being said, there were definitely a few takeaways from this evening’s 112-74 shellacking of VSU for the fan base to consider, so without further ado, here they are:

The Dawgs frontcourt seems imposing.  The Dawgs triumvirate of Yante Maten, Derek Ogbeide and Rayshaun Hammonds, all of whom are 6’8″, will create a lot of mismatches this season.  Maten, who was coming off of a 33-point effort in last Sunday’s loss to Michigan State (don’t worry, also just a scrimmage), had his way underneath with the Blazers scoring 24 points and nabbing 10 boards. This was my first look at the freshman blue-chip Rayshaun Hammonds, who also notched a double-double with 17 points/10 rebounds, and color me impressed.  He’s got good size to him, he’s explosive around the basket, and he even knocked down a three-pointer.  Hammonds and Ogbeide, who had 17 points, will both benefit a lot this season inside as opposing defenses key in on Maten.

Georgia may have several players that can score from beyond the arc. Historically, Fox has not built his teams at UGA around having 3 to 4 guys who can knock it down from the perimeter, but this year may be different.  Keep in mind, once again, that it was just an exhibition, but the Dawgs had 6 different players connect from the outside on a night in which they made 7 of 23 from three-point range.  If Georgia can force teams to play them tight around the perimeter that will really open things up inside for both Maten and Ogbeide.  Not to mention that scoring from beyond the arc has been trending in college basketball for several years now, and it would be nice to see UGA following suit.

UGA is really going to miss J.J. Frazier.  I realize that I’m not providing anything insightful with this statement, but after watching tonight’s game it had to be said. It wasn’t just that J.J. poured in over 18 points a night for Georgia, but it was how he did it. Frazier could get into the paint off the dribble from just about anywhere on the court.  His quickness coupled with his ball-handling skills kept opposing defenses on their heels, and his penetration opened things up for his teammates. Turtle Jackson doesn’t have that same skillset.  He brings the ball up the court and then either passes to the wing or immediately hands it to a big at the top of the key.  Turtle doesn’t threaten the other team’s backcourt the way J.J. did, and that could be a problem that handicaps this team offensively when they start taking on more stout competition.

The regular season gets underway next season as the Dawgs host the Bryant Bulldogs from Smithfield, Rhode Island inside Stegeman Coliseum.