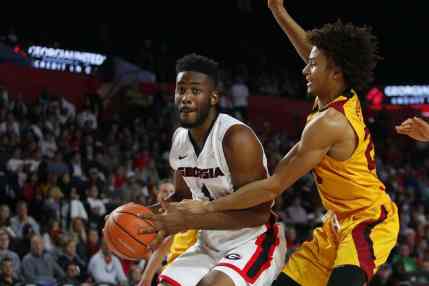 Georgia’s (7-1) offense was highly efficient over the last 4 minutes of Tuesday night’s game as they got points on 7 of their final 8 possessions.  The Dawgs were able to score consistently when they needed to down the stretch, and that played a critical part in this team being able to escape with a 87-82 win over Winthrop (5-4) last night.

With the game knotted up at 74 apiece, freshman Rayshaun Hammonds broke the tie with a three from the top of the key that made it 77-74 UGA with 3:20 remaining.  The Dawgs scored their next 6 points in the paint on baskets by Mike Edwards, Yante Maten and Turtle Jackson, and those buckets turned out to be enough to keep the Eagles at bay.

Georgia’s strong play at the end of the game was a stark contrast to its play towards the end of the first half.  The Dawgs shot just 2 of 11 from the floor and committed 3 turnovers during the final 7 minutes before the break.  Despite leading 17-5 early on and holding leads of 7 to 9 points for much of the first half, UGA went into the intermission with just a 40-38 advantage.

Winthrop actually took and held the lead for significant chunks of time in the second half.  This game featured 10 lead changes, and it wasn’t until the aforementioned three-pointer from Hammonds and the subsequent run that followed it that Georgia was able to really take control of this one.  This contest definitely had the potential to be a huge letdown for the Dawgs following big wins at Saint Mary’s and Marquette, so credit UGA for taking care of business inside Stegeman and avoiding what certainly would have been a bad loss.

Georgia’s biggest issue on the night was carelessness as the Bulldogs gave the ball away 16 times, which led to 22 points for the Winthrop Eagles.  When Georgia wasn’t giving the ball to Winthrop, they played pretty sound offense: 53% from the field, 53% from 3PT line and 17 assists.  Georgia’s success from beyond the arc might have been the difference in this one with Maten and Turtle Jackson hitting 3 each, and Hammonds knocking down 2 triples.

Maten and Winthrop’s Xavier Cooks had quite the back and forth battle on offense on Tuesday night.  The Eagles made a couple of defensive decisions regarding Maten that turned out to be quite costly: they left him open for 3’s from the top of the key, and they tried to play him one-on-one in the paint.  Yante took full advantage of both of those coaching choices and scored 25 points and grabbed 11 boards for his 4th double-double of the year.

Winthrop’s Cooks netted a game-high 31 points himself (22 of them coming after halftime).  At 6’8″, Cooks was a matchup nightmare for Georgia due to his ability to get into the lane off the dribble; he only made 2 of 11 from the floor prior to the break, but he found his rhythm once the second half kicked off.

Georgia began this game extending its man defense to the perimeter to limit Winthrop’s looks from the three-point time, and it worked for about 16 minutes as the Eagles had just 1 triple. However, Winthrop, a team that entered this game making nearly twelve 3’s a night, buried 3 shots from beyond the arc during the final 4 minutes of the first half; they finished the game with 8 three-pointers on a 42% shooting effort.

UGA’s perimeter defense continues to be a soft spot for this team.  The Dawgs’ backcourt has had trouble keeping opposing teams from driving by and getting into the lane for easy baskets.  Tonight, Winthrop carved Georgia up for 40 points in the paint, which is far too many considering UGA’s size advantage compared to the Eagles.

The Bulldogs ended up with four other players – Jackson (14), Mike Edwards (11), Rayshaun Hammonds (10), Derek Ogbeide (10) – in double-figures along with Maten.  Turtle had a game-high 7 assists to go long with his points.

The Dawgs have a 10-day layoff during Final Exams before returning to action on December 16th when Georgia travels to take on UMass.