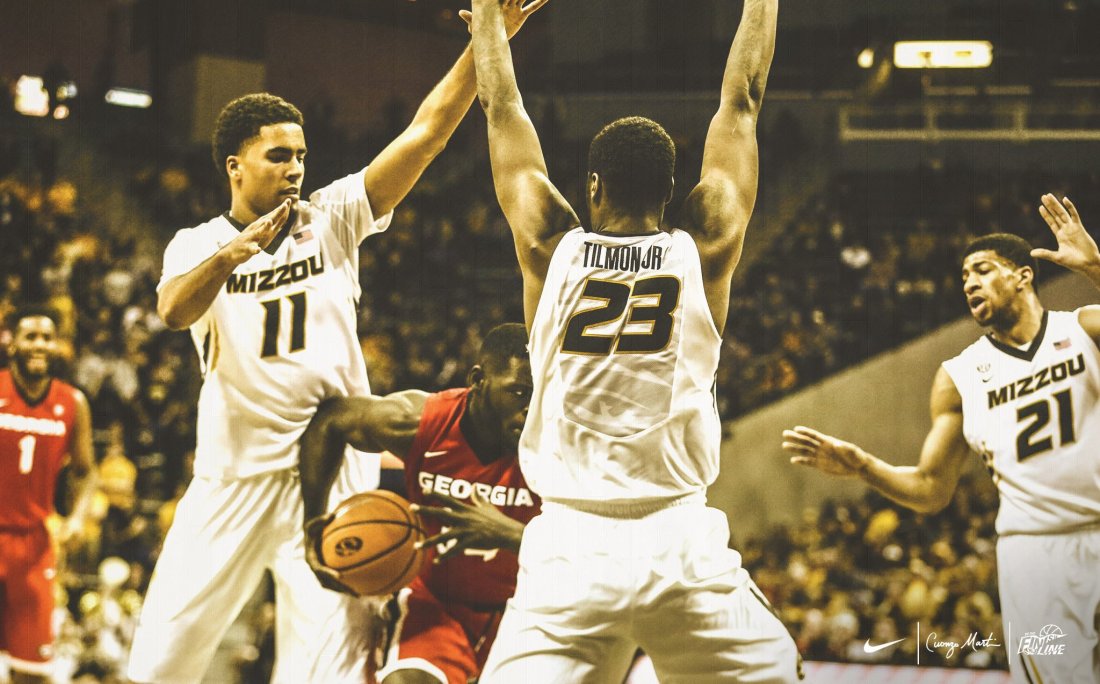 The Georgia Bulldogs (11-4, 2-2 SEC) offense took the night off in Columbia last night against the Missouri Tigers.  The Dawgs’ man defense was strong for the first 20 minutes as they stayed in front of Mizzou and limited the Tigers to just one shot (most of the time).  Georgia held Missouri, a team averaging 10 three-pointers a night, to just 1 prior to the break. When the Dawgs returned from the locker room following the intermission, however, Coach Fox’s team forgot to bring their defense with them.  When a team can’t score, it must rely on its defense.  If that team can’t defend either, then that’s trouble; and last evening, that was Georgia.

UGA basketball strategy under Coach Mark Fox is fairly simple: hard-nosed defense along with controlled tempo offense with a lot of touches inside for the bigs.  On Wednesday, Georgia didn’t really follow either of those scripts.

Offensively, the Dawgs just weren’t themselves.  Rather than feeding the ball into its bigs, UGA opted to settle for outside shots.  The result: Georgia shot just 3 of 10 from beyond the arc, and the Dawgs scored only 10 points inside prior to the intermission (UGA hit 7 of 21 3PTers in the game). The Dawgs finished this contest with just 20 points in the paint, which is one of this team’s lowest outputs in that category this season.

Yante Maten had a particularly off night – he didn’t even convert a field goal before halftime and ended up with only 9 points in the game.  The crazy thing was Mizzou didn’t even double Maten every time he got touches; Tiger freshman Jontay Porter made life extremely difficult for Maten as he caused him to take forced looks and miss inside. Conversely, Porter notched a double-double himself with 15 points and 10 boards.

However, Yante’s bound to have an off night every once in a while, and when he does Fox needs other players to step up – that did not happen last night.  Turtle Jackson and Tyree Crump were the only Dawgs to finish in double-figures as they scored 10 apiece.  Juwan Parker (1-5) and Jordan Harris (0-4) combined for only 2 points on a 1 for 9 performance.  Both Rayshaun Hammonds and Derek Ogbeide had fairly forgettable games as they notched 7 points and 6 points, respectively.

After witnessing how fluid Georgia played last Saturday in its blowout of Alabama, it was uncanny how rigid they looked last night.  Against Bama, the Dawgs made the extra pass and found open shooters; they pounded the ball inside to their bigs.  Georgia finished that game with 13 team assists; they could only muster 8 assists on Wednesday.

The most frustrating part about this loss, though, had to be the complete lack of effort that UGA showed on the defensive end during the game’s final 20 minutes; it was vintage “The UMass game” from earlier this season.  Georgia’s bigs – Mike Edwards in particular – appeared as though they had never been asked to help guard an on-ball screen.  The whole team was disinterested in getting back on defense during Missouri’s transition offense, which resulted in numerous uncontested fast break points for the Tigers.  After hitting only 1 three in the first half, Mizzou hit 4 after the break.  The Tigers shot over 57% in the game’s final 20 minutes after making only 26% from the floor in the first half – getting a lot of wide open lay ups and dunks will certainly help bolster a team’s field goal percentage, though.

Despite all this doom and gloom, it should be noted that Georgia had a 23-20 lead at halftime.  Mizzou opened the second half with a 13-5 run, however, as they seized momentum back from UGA with 16:22 left and the Tigers leading 33-25 on a layup by Jordan Geist, who scored 10 points on the night (Mizzou had 4 players finish in double-figures).

Georgia made a run at the Tigers with a little less than 10 minutes remaining as they went on a 7-0 run, but Mizzou extinguished any hopes that the Dawgs held regarding a comeback as they responded with a 15-4 run themselves that was capped off by a bucket by Kevin Puryear that made it 57-44 with 6:01 left. The game was over.

After just playing a game in Columbia, the Dawgs will take on a team FROM Columbia this Saturday when Frank Martin’s South Carolina Gamecocks roll into town.  Considering last night’s debacle, I’d say the Dawgs need to win this one pretty bad to even up their record on the week and to get themselves over .500.  Personally, I was hoping for a big road win last night to help soften the heartache from the end of the National Championship game on Monday, but alas, the hangover continues.