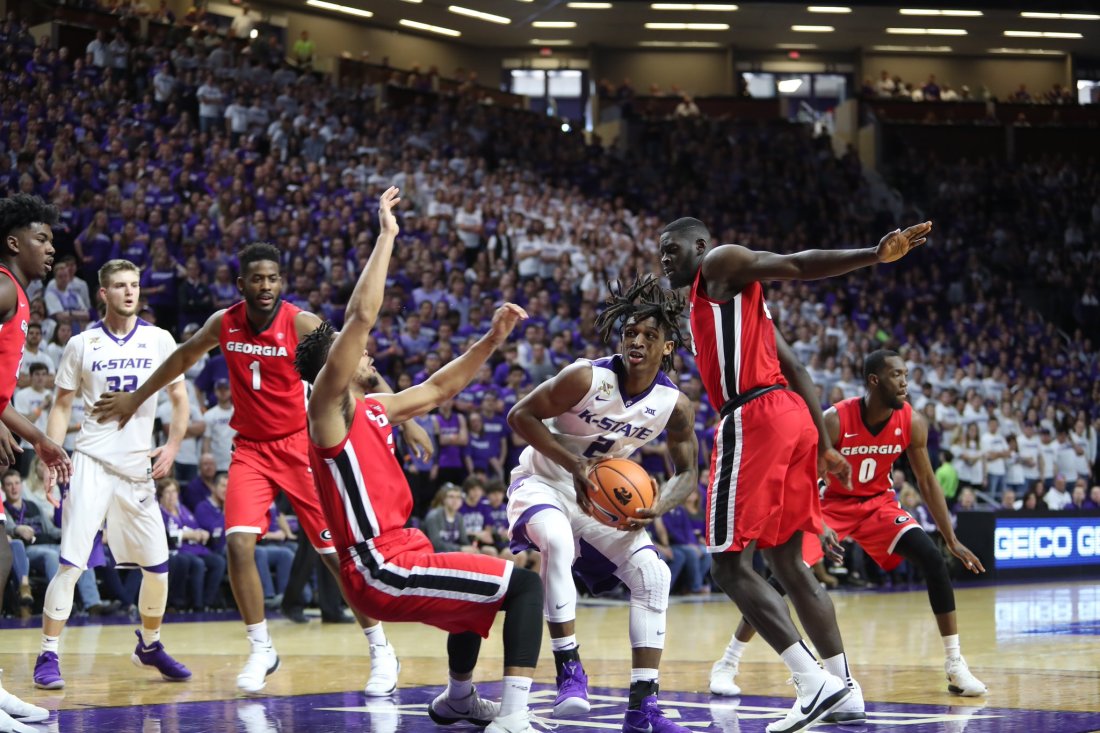 Georgia’s offense is a one-man show, and when that man is double-teamed, the show quickly comes to a grinding halt.  Today in Manhattan, UGA had the following stretches of basketball in minutes in which they went without a field goal: 4:09 (1st half), 7:10 (1st half) and 6:51 (2nd half).  The 6:51 field goal-less span of game turned out to be the most devastating for the Dawgs as it occurred over the final 7+ minutes of this contest.

The game was locked up at 49-49 with 5:21 left, but the Dawgs (12-8, 3-5) couldn’t muster the offense necessary to earn a road win against Kansas State.  The Wildcats doubled Maten relentlessly during the final portion of the game, sometimes before the senior had even received the ball.  Yante had only 1 shot attempt over the last 4 minutes of play.  Conversely, K-State big, Dean Wade, who averages 16 ppg, scored 2 monster buckets in the game’s final 2 minutes, and his team won 56-51.  Good teams rely on their stars to win games for them at the end; Georgia couldn’t even get its star the ball.

Yup, Georgia scored 51 points.  I thought the trip outside the conference might help the Dawgs locate some sort of offensive rhythm; boy was I wrong.  Georgia took slow tempo to a whole new level. Mark Fox’s team had 0 fast break points. UGA’s offense is run by a man named Turtle, which is kind of fitting considering the pace at which Georgia plays.  Maten only got 14 points, but to be fair, he was shadowed by multiple Wildcat defenders all afternoon. He’s the only threat on this team, and opponents are fully aware.  Honestly, I feel bad for the kid.  Playing these types of games has to be incredibly frustrating.

Turtle had one of his worst games of the season as he shot just 1 of 10 from the floor. Jackson had two opportunities for layups late in the second half, and he couldn’t convert either.  Both misses were troublesome as he was pretty much left unguarded as his man chose to follow Maten off of a screen-and-roll each time.  Had Turtle made the shots, maybe Yante would have gotten more opportunities.

Juwan Parker had a great first half, scoring 7 of his 11 points, but he REALLY hurt the Dawgs down the stretch in this one. Parker had 2 turnovers and a wild three-pointer that caromed off the backboard (which basically made his 3rd turnover) in the final 4 minutes.  Remember how the game was tied at 49? These plays didn’t help.

Rayshaun Hammonds was reinserted into the starting lineup, but the freshman could not take advantage. Rather, he continued to struggle to put the ball in the basket.  After making his second shot, Hammonds then missed his next 5 attempts.  He had a soft take to the basket with a smaller guard on him that he couldn’t finish, and he failed to connect on multiple open looks from beyond the arc.  At the start of the year, NBAdraft.net had Hammonds listed on its 2019 Mock Draft, but that’s not the case anymore.  The highly-touted freshman scored in double-figures 5 times prior to conference play, but he’s eclipsed that mark just 3 times since getting into the SEC slate. He’s also posted 4 goose eggs in the scoring column in 4 games during that same time span. Hammonds does not look confident at all with the ball in his hands right now, and I’m not sure how much better that’s going to get this season.

Georgia’s defense is legit; there’s no doubt about it.  It’s the only thing keeping them in games at this point.  UGA held a K-State team that came into the game averaging 77 a night to just 56 points and 38% from the floor.  Dean Wade got 20 points, but the team’s leading scorer, Barry Brown, who scores over 17 a contest, was limited to only 9 points on a 2 of 9 effort from the floor.  For the most part, the Dawgs only gave the Wildcats one chance to score each trip as they held K-State to 4 offensive rebounds and just 4 second chance points.

The offense is completely handcuffing this team.  They did a few nice things offensively, stress on the word “few”. Georgia hit 4 of 5 to start the game with 4 different players making the shots.  Derek Ogbeide and Tyree Crump ran several beautiful screen-and-rolls that resulted in easy buckets at the rim for Ogbeide.  But then the Dawgs go minutes upon minutes without scoring.  They can’t get the ball to their best player during  critical moments of the game, and there’s no one else on the court that can put the ball in the basket and garner some of the defense’s attention.  Looking back on that win at LSU – how on earth did the Tigers allow the ball to go into Maten?  If I’m coaching LSU on that last in-bounds play, I’m putting two guys on Yante.  Maybe three. I’m letting anyone else on Georgia try to beat me.  That’s what K-State did in the second half, and that’s why they won.

Georgia’s now lost 3 in a row and 5 of its last 6. The Dawgs play #20 Florida inside Stegeman on Tuesday. Yikes.