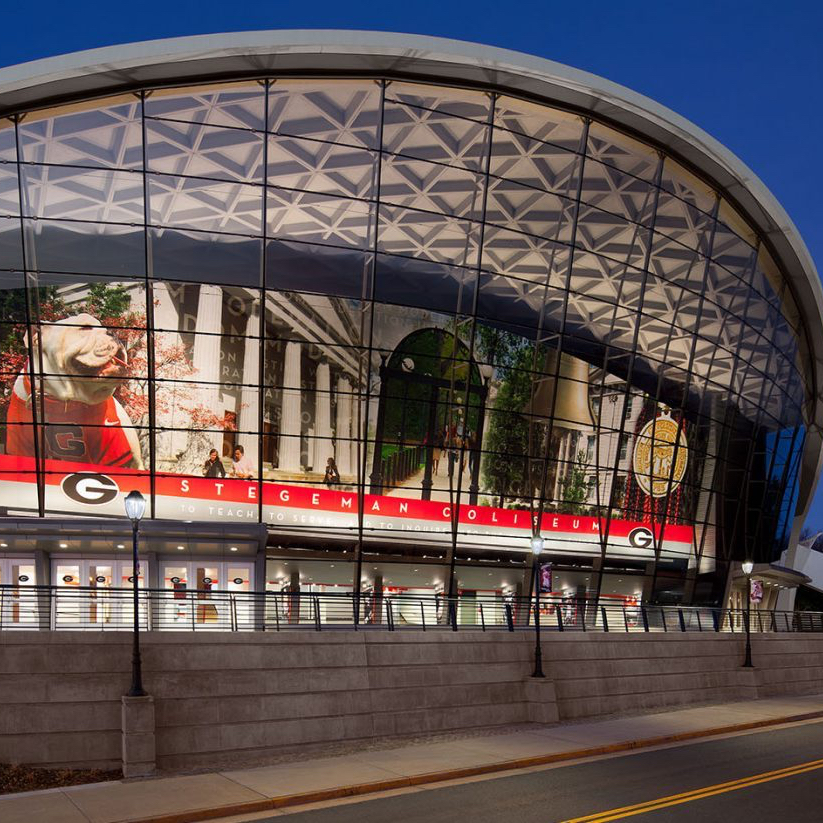 After an abysmal midweek showing in Columbia against the Gamecocks, a rejuvenated group of Georgia Bulldogs – just 8 of them as opposed to 12 – unleashed a level of offense that hasn’t been witnessed this season.  Maybe the Dawgs were inspired by their absence from the FBI investigation that has become the massive scandal that is currently consuming college basketball?  That might be a stretch. Whatever the case, Georgia (16-12, 7-9) scored 93 points, the most they’ve scored all season in a game, and earned a must-win victory over the LSU Tigers.

The UGA offense certainly looked different from what we’ve been accustomed to this season.  The Dawgs pushed the ball up the court and actually got shots up early in the possession.  Teshaun Hightower, who was this week’s new starter, did a particularly good job of keeping Georgia playing at a faster tempo.  Georgia took 61 shots from the floor, which marked just the 2nd time this season that UGA has had more than 60 field goal attempts in an SEC contest.  And Georgia didn’t have one of its hallmark scoring droughts, to the delight of both Mark Fox and the fan base.

The Dawgs were able to get the ball into Yante Maten on the block before the Tigers were completely set on defense, which resulted in a lot of one-on-one opportunities for Maten, who played absolutely fantastic on the afternoon.  Maten finished with 27 points, 11 rebounds and 6 blocks, and he looked like an NBA player as he had LSU’s Duop Reath playing on skates.  Maten got whatever he wanted around the rim, and he had several really nice jumpers from the wing in which he jab-stepped at the defender before pulling up for the shot.  Maten’s aggressiveness got Reath in foul trouble, and the LSU big, who averages nearly 13 points a night, scored only 1 point in this one. 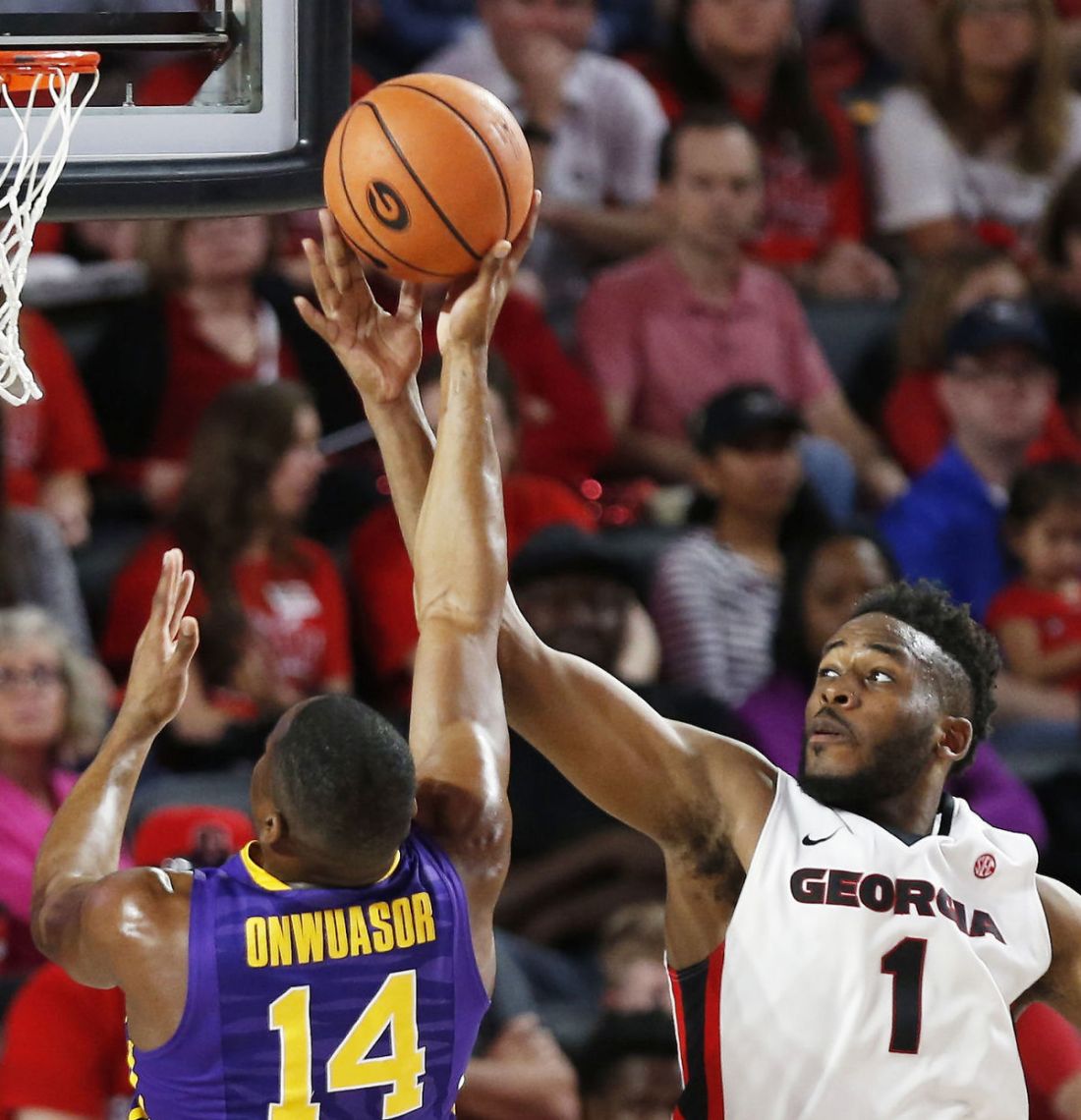 Of course, it didn’t hurt that the Tigers’ defense was basically nonexistent.  LSU either chose to not double Maten, or the the double was slow to converge.  The Tiger press was incredibly soft, which might have been the result of poor execution, or it could have just been by design.  LSU routinely had 4 defenders below the free throw line on its press, giving Georgia a number of 3-on-2 and 2-on-1 opportunities at the rim once they got the ball across half court.  The Dawgs had 15 fast break points.  I’d wager that’s the most points they’ve gotten off the break in an SEC game this season.  Rayshaun Hammonds, who scored a career-high 21 points, was a benefactor of all that fast-breaking.  The freshman scored the majority of his points around the rim or at the free throw line, and he is finally starting to show some of that aggressiveness on offense that was on display at the start of the season.

It wasn’t all sunshine and roses for the Dawgs, however.  Georgia’s backcourt struggled to stay in front of the Tiger perimeter players as they moved the ball into the paint (where they got 34 points) with relative ease.  UGA also gave the ball away 16 times, and the Tigers converted those turnovers into 20 points. Georgia’s perimeter shooting was atrocious. The Dawgs hit just 2 of 16 from beyond the arc in the first half, and they finished the game 5 of 22 on triples. Luckily, there were lots of other ways to score against LSU’s porous defense that the ineffective shooting from the outside didn’t really hurt UGA that badly.

Although I find it bizarre that Georgia does not have a set starting five with 3 games left in the regular season, hats off to Mark Fox for going with what he feels like are his best 8 players.  At this point in the season, teams should not be playing 10 to 12 guys as Georgia has been unless you are running some fashion of a “40 minutes of hell” up and down type game, which UGA clearly is not.  Despite what Coach Fox said at his press conference following the wins against Florida and Tennessee, it’s not that I don’t like players like Mike Edwards and E’Torrian Wilridge. I just like it better when they are sitting on the bench.  With Jordan Harris apparently done for the year, I’d say the 8 guys that got all the minutes yesterday are the top players on this roster, and hopefully they continue to garner the lion’s share of court time.

Entering yesterday’s contest, Georgia had 6 quadrant 1 (Q1) wins, which tied them with 10 other teams in the country.  There were only 5 other teams in the nation with more Q1 wins.  Despite UGA’s less than stellar record, the Dawgs have a significant number of Q1 wins.  Although, in beating LSU, the Dawgs might have cost themselves one of those Q1 wins as the Tigers’ RPI will likely go below 75, and that would negate Georgia’s Q1 win in Baton Rouge earlier in the year.  Not to worry, the Dawgs have another Q1 opportunity this Wednesday when they host Texas A&M on Senior Night.