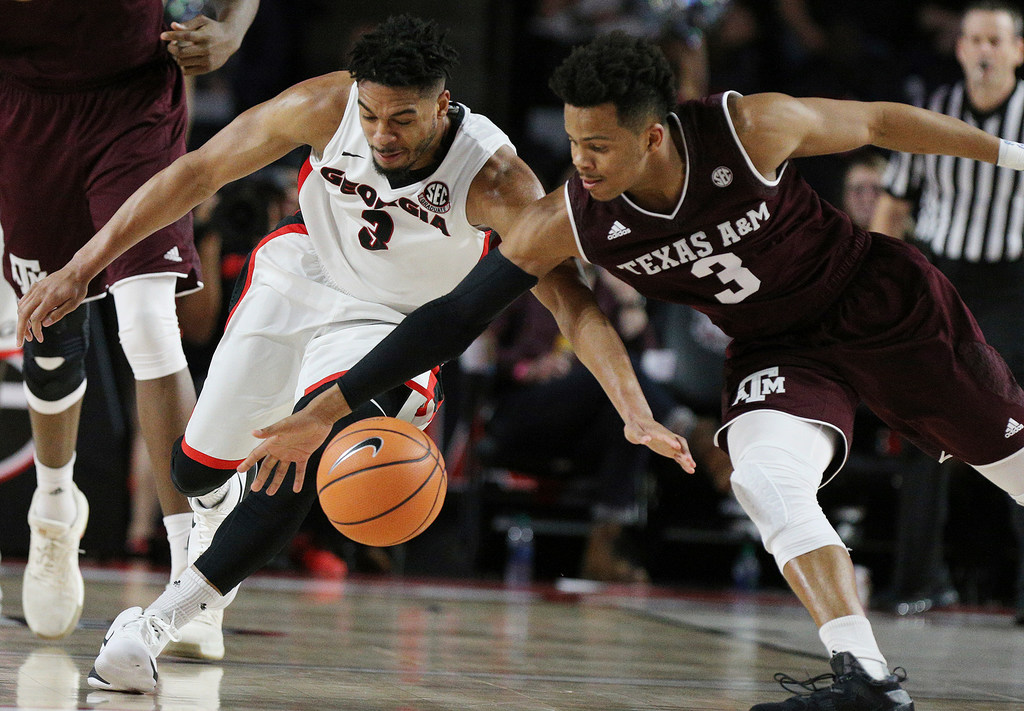 With the Dawgs trailing 61-60 with only 12 seconds left and T.J. Starks at the line for the Aggies shooting a one-and-one, the casual onlooker might expect that Coach Mark Fox would be telling his guys to either A) call timeout if he misses or B) get the ball across halfcourt and THEN call timeout.  Neither of those phrases was uttered, however, and Georgia’s Teshaun Hightower pushed the ball up the right side of the court following Starks’s miss and took it right to a well-covered Juwan Parker (who had a well-covered Tyree Crump right next to him).  Parker managed to force up a desperation attempt, but it fell way short, and UGA let a critical late-season game slip through their fingertips.

The reason why Georgia should have called a timeout to set something up is fairly obvious: Hightower is a freshman.  He isn’t battled tested yet, and he doesn’t have any significant late game experience.  Hence, why he took the ball to an already crowded side of the court.  A set play would have at least given Georgia better spacing on their final possession.

I cannot fault Hightower, though, for his indecision during the waning seconds.  He gave Fox some incredibly big minutes off the bench as the freshman scored 11 points, grabbed 5 rebounds and dished out 4 assists.  Yes, he did have a costly turnover against the Texas A&M press that allowed the Aggies to take a 61-60 advantage on the ensuing possession.  But again, he’s a freshman, and he’s going to make mistakes.  I’m positive he will never make that same mistake again as long as he’s donning the Red and Black.  Hightower’s aggression on offense is something that Georgia’s sorely been lacking from the point guard position this year, and it was refreshing to see the TAMU defenders backpedaling when he brought the ball across halfcourt.  Against Turtle Jackson, and even sometimes Crump, the TAMU guards, specifically Starks, were pushing the Georgia guards well beyond the three-point line, which made it difficult for the Dawgs to get into any sort of offensive rhythm.

The UGA backcourt once again failed this team defensively.  The freshman Starks drove the ball to the basket with little resistance all night.  I was shocked to learn that he only averages 9 points a game; he scored 15 against the Dawgs, and I would have guessed that was around or slightly below his average considering how easily he scored around the rim.  Even more shocking: Starks was a 3-star recruit.  Whoever evaluated and offered him on the Aggie staff deserves a steak dinner because he looks like he’s going to be a load to deal with in the SEC for a few years to come.

D.J. Hogg, who was right around his average with 11 points, had little trouble getting around Rayshaun Hammonds when he wanted to take the ball into the lane.  The Aggies outscored Georgia in the paint 34-16, and I’d wager that more than half of those buckets came from the TAMU guards.  Considering how little production that UGA gets from the guard position, it’s a shame that the Dawgs’ backcourt hasn’t defended better this season.

I definitely feel for Yante Maten as I’m positive this was not how he envisioned his last game in Athens unfolding. Maten had 16 points and 12 rebounds, but it came at the expense of a 5 for 18 shooting performance.  He either had Tyler Davis or Robert Williams (both of who are monsters) leaning on him the whole night, and any time he received the ball on the block a guard came down immediately to double.  By the end of the game, Maten appeared to be exhausted. He missed a number of shots around the basket that he normally converts in his sleep, and he hit just 4 of 8 from the free throw line, which I attribute to tired legs.

Last weekend, Georgia put up a season-high 93 points in their romp of LSU, and Fox only played 8 different players.  That obviously didn’t sit well with the coach as he ran 11 different guys into the game last night.  I thought Mike Edwards time was done; I guess I was wrong. In a mere 2 minutes, Edwards fouled a TAMU player shooting a triple, and then he dribbled the ball into a turnover in the paint on offense (why was he dribbling in the paint in the first place?). E’Torrion Wilridge played all 13 of his minutes before the intermission; he scored 3 points. Wilridge never saw the floor again after halftime, which led me to wonder why he played so much in the first half.  I’ve asked this same question so many times this season.  Since Georgia’s not that good of a team, I just can’t seem to grasp why Fox continues to play so many players, but at least I know I’m not alone in this line of thinking.