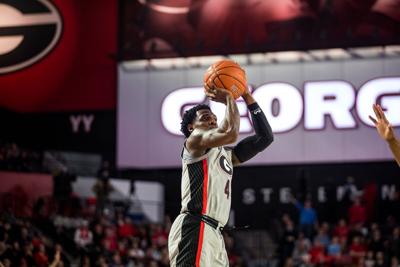 A year ago, UMass (7-6) bested Georgia (8-4) 72-62 in Amherst in a game in which the Minutemen hit 12 three-pointers. In that game, UMass blew the doors off UGA from the start and went into the intermission with a commanding 43-24 advantage.

Tom Crean’s team was having none of that business in Athens this evening. UMass hung around for a bit in the first half and kept things moderately close, but for the most part the Dawgs handled the Minutemen with relative ease in a game that Georgia led the entire way.

Georgia’s defensive pressure and length frustrated the Minutemen. Sure, Luwane Pipkins scored 22 points, but he shot just 7 of 20 from the floor, and he missed on all 8 of his three-point attempts. Pipkins scored 10 points prior to the intermission, and he looked as if he could get to the rim whenever he wanted. Turns out, however, it didn’t matter because he was the only player on UMass capable of threatening the Dawgs. Unlike last year’s game, UMass made only 4 triples against Georgia in this one, and they shot just 18% in doing so.

The Minutemen attempted to ramp up the tempo in the second half with some full-court pressure, but UGA seemed unphased as the Dawgs simply let their 6’11” center, Nicolas Claxton, bring the ball up the court. Problem solved. I’m still not really sure of the intent of the UMass press since it didn’t seem to affect the Dawgs in the slightest.

Georgia took a 43-32 lead into the half after Rayshaun Hammonds sunk an off-balanced triple from the corner with time winding down. After making less than 29% of this three-point attempts a year ago, Hammonds is now shooting over 46% from beyond the arc on the year. He definitely looks much more comfortable playing on the wing this year; too many possessions last season Hammonds was forced to work off the block, which may not be the most effective spot for him to receive the ball. Hammonds is definitely more a stretch 4 or even a 3 rather than a traditional big, and the sophomore looked the part this evening as he finished tonight’s game with 18 points to go along with 8 boards.

I realize that I’m starting to sound like a broken record, but I cannot get over how much Nicolas Claxton continues to get better and better as the year progresses. As mentioned above, he’s now bringing the ball up on the press break. Claxton can guard every position on the court; he got isolated on Pipkins in the second half, and managed to not only keep the speedy point guard in front of him, but Claxton just went ahead and blocked his three-point attempt. The Slim Reaper led Georgia with 20 points and 11 rebounds en route to ANOTHER double-double (that’s 6 on the season), and he’s easily been the best player on the court in all three of UGA’s recent victories.

Georgia closes out 2018 with wins over Georgia Tech and UMass, and the Dawgs are really just one meltdown of a second half away from being on a six-game win streak. Claxton isn’t the only one improving; the Dawgs as a team are getting better. Like Hammonds, Tyree Crump is also converting more of his perimeter attempts this season. Today, Crump scored 14 points on a 3 for 5 effort from beyond the arc, and he is hitting over 40% of his three-point shots on the season.

UGA opens up SEC play this Saturday in Knoxville. With the start of the conference slate, everything is about to get more difficult for Georgia. Teams are going to apply tons of pressure to UGA’s backcourt in an effort to exploit the Dawgs’ lack of a true point guard. Georgia is going to struggle, but they are also going to surprise some people.

I’m super excited to see these potential matchups on Saturday: Grant Williams/Claxton and Admiral Schofield/Hammonds. A month ago, I would have assumed the Vols would blow Georgia out in this one. Now, I’m not so sure.