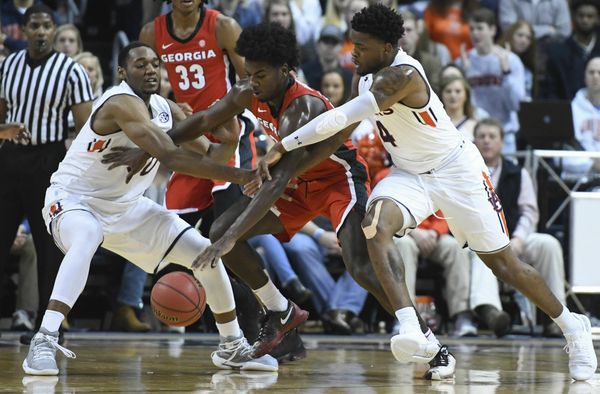 The Georgia Bulldogs (9-6, 1-2) are going to continue to find the sledding fairly tough when they take on competition of the calibre of the #11 Auburn Tigers (12-3, 1-1), especially considering that Bruce Pearl has one of the best backcourts in the nation in Jared Harper and Bryce Brown. It’s no secret: guard play is the glaring weakness of this UGA team. Harper and Brown had no trouble exploiting the Dawgs’ Achilles Heel as they combined for 37 points on a 7 for 13 shooting performance from the three-point line in the Tigers’ 93-78 win over Georgia.

Believe it or not, this game was actually close for several stretches. Georgia came out of the half and cut a 10-point Tiger lead to just a 54-48 advantage following a triple by Teshaun Hightower with 17:05 remaining. It didn’t take long for Auburn to stretch the lead back into double-digits, though, as Harper connected on one of his 4 three’s to send the Tigers up 61-48 with 15:27 remaining.

Georgia sort of hung around for the remainder of the game, and by that I mean they stayed within 10 points at times; but the Dawgs couldn’t trim the Tiger advantage to single digits the rest of the way, and Auburn continued to push the pace.

After trailing 13-4 early on in this one, Georgia went on an 8-0 run and actually took a brief 22-20 lead on a Jordan Harris three-pointer with 11:20 left in the first half. The referees called the game pretty tight from the opening tip, and that kept Bruce Pearl’s team from ramping up the game’s tempo, which definitely benefited Georgia.

The Dawgs were in the bonus for over 10 minutes in the first half of play. Georgia took advantage and made 8 of 9 free throws. However, UGA stopped attacking as much and started to settle for too many threes, which is not a good look for this Georgia team as they went 4 of 12 from beyond the arc before the break; the Dawgs hit just 3 of their last 14 field goal attempts heading into the intermission, and Auburn took a commanding 48-38 lead into the half.

Nic Claxton had consecutive possessions in the opening 20 minutes where he took Austin Wiley off the dribble and pulled up to knock down jumpers just inside the three-point line. Again, that’s a 6’11” center doing something that’s meant for a point guard. Insane.

Claxton finished with 15 points and tied his career-high 6 blocks. Auburn applied full-court pressure for most of the game, and Claxton routinely brought the ball up the court. While it is absolutely wonderful to have a center who can do this, I’m not certain it didn’t begin to wear the sophomore down as the game went on. In an ideal world, Georgia would have a guard or two that could handle this responsibility so that Claxton could spend more time in proximity to the rim.

The Tigers had 5 players end up in double-figures, but probably the biggest offensive spark came from reserve Anthony Mclemore, who scored 11 of his 15 points prior to the break. He was active on the glass and without the ball, and he really ignited an Auburn offense that started the game rather stagnant. When Mclemore entered the game, his team trailed 26-22 with a little over 10 minutes remaining; he was a major reason why Bruce Pearl’s team was able to take control of this game heading into the half.

I hate to be a moral victory type of fan, but I found myself surprised that Georgia competed as much as they did in this one, especially considering what happened last Saturday in Knoxville. I certainly didn’t expect the Dawgs to have much of a lead, let alone for 5.5% of the game.

That being said, the struggle will continue to be real for Georgia whenever they face teams with above average backcourts. Unfortunately, I just described both of UGA’s opponents for next week: #18 Kentucky and Florida. Whoever designed this SEC slate for Tom Crean’s first jaunt through the league has a cruel sense of humor.