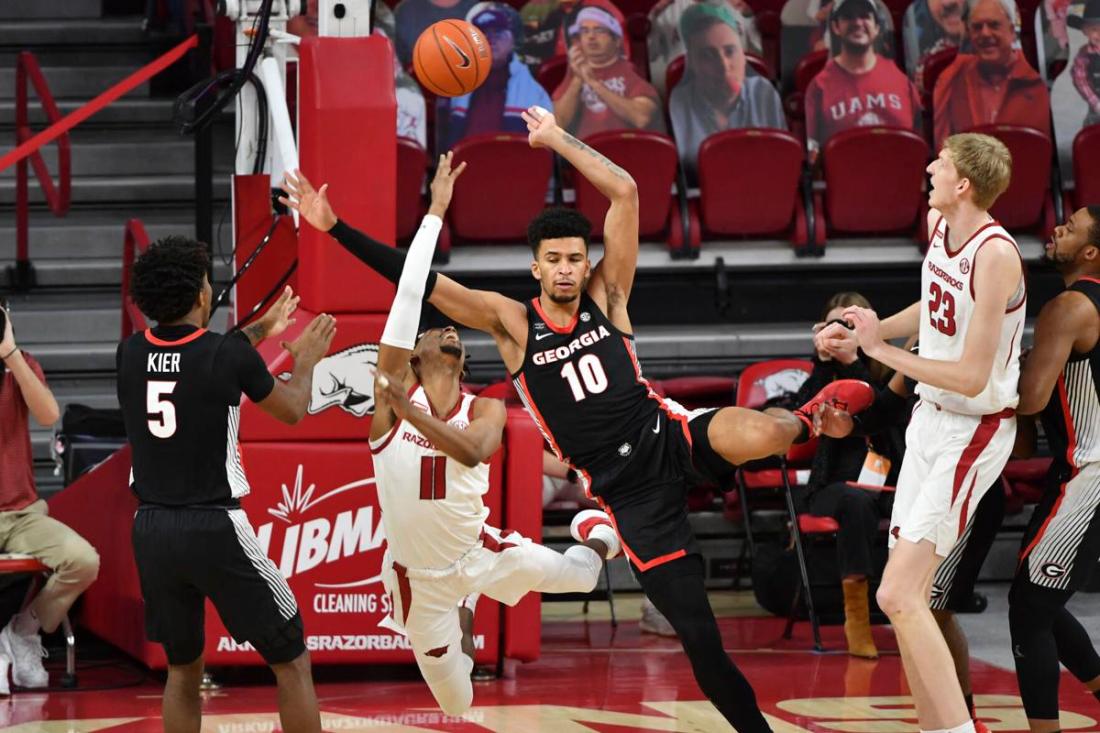 The Georgia Bulldogs (7-3, 0-3) remained winless in conference play after getting drubbed 99-69 by Arkansas in Fayetteville. The sky is not falling yet for this UGA basketball program as next week should be an easier slate (Auburn, Ole Miss), but what transpired today against the Hogs should give Georgia fans some pause for concern.

There’s an old saying in sports that “defense travels”; today, Georgia proved that’s not always true as the Dawgs’ defense clearly got lost somewhere en route to Bud Walton Arena. UGA entered this contest giving up an SEC-worst 88.5 points per game, and the Dawgs should safely hold that bottom spot in the defensive scoring category after yielding 99 to the Razorbacks on Saturday.

Georgia has particularly struggled at defending the perimeter this season. In its two SEC games, UGA’s opponents have made nearly 39% of their triple attempts. This afternoon, the Dawgs were a step late on closeouts, and Arkansas made them pay by knocking down 12 of 21 (57%) from beyond the arc, which is 3 more triples than the Hogs have been averaging a game this year.

While Arkansas was led by Moses Moody’s 25 points, the Dawgs allowed a total of five Hogs to finish in double-figures (and one other to also score 20). Believe it or not, this game was relatively close at the half with Georgia trailing by just 6 before a disinterested group of UGA players came out after the break and permitted Arky to put up 56 second-half points.

Georgia’s lack of a perimeter game is still a problem. In Tom Crean’s first three years at UGA, his team’s have shot 32%, 30% and 30.9% (this year’s bunch). When a coach states at his initial press conference that his team is going to shoot the three more, one would assume that would mean that his rosters would regularly have 3 to 4 legitimate outside threats. However, that’s never been the case for Crean, and this year’s team is no different. Georgia basically has two three-point threats: Justin Kier (42%) and P.J. Horne (35%). This is not enough firepower for a team that’s shooting over 21 triples a contest.

On Saturday, the Dawgs made just 5 of 19 (26%) on three-pointers. However, even if Georgia hits 3 more from beyond the arc, they still lose by 21, so it’s probably a non-factor in a game in which UGA played zero defense.

Toumani Camara and Sahvir Wheeler cannot miss significant chunks of time in games due to foul trouble. Today, Camara was the culprit, and his absence from the lineup definitely hurt the Dawgs on both ends of the court. The sophomore picked up his second foul of the game with over 15 minutes left in the first half, which caused him to have to spend nearly 10 minutes on the bench. He would eventually foul out of the game with 10 minutes remaining. Camara scored 15 points in 16 minutes, which is highly effective, but his inability to stay on the court served to keep him in check.

Wheeler didn’t have any foul issues, but he failed to show up in the second half. Prior to the break, the sophomore looked phenomenal as he scored 10 points on an array of dribble-drives from the perimeter. For 20 minutes, Wheeler looked the part of a premier SEC point guard; he’s got to find a way to put together two halves like that, especially when his team’s leading scorer is not participating.